Causes in the respiratory system

The upper respiratory tract (from the larynx (voice box) upwards) can be affected by certain diseases that often manifest themselves as persistent infections, which in turn can cause halitosis. The most common are rhinosinusitis and chronic tonsillitis.

Breathing through the mouth

Disease and abnormalities in the osteomeatal complex can block the orifice of the paranasal sinuses, causing stasis and infection in the cavities. Patients mainly experience discomfort in the form of a nasal discharge (runny nose), coughing, mucus in the throat, white tongue and/or halitosis. Nasal discharge results in the continuous build-up of pus-filled mucus at the back of the tongue, consequently a second source of chronic infection develops, which in turn produces changes to the bacterial flora, which then triggers halitosis. Some bacteria, such as the fusobacteria and bacteroides, are linked to chronic sinusitis, which can produce foul-smelling VOCs and VSCs.

Breathing through the mouth affects the quantity and composition of the bacteria in saliva. Those who breathe through the mouth are more predisposed to halitosis. Deviated nasal septum is another condition that can sometimes block the sinus orifice, resulting in infection. A study on 24 patients with problems of obstruction to osteomeatal complex, showed that after corrective surgery, 80% of the patients experienced an improvement in their halitosis. Another study has demonstrated that halitosis is one of the main symptoms in a population sample of 100 paediatric patients with chronic rhinosinusitis. Additionally, adenoiditis can also cause halitosis. 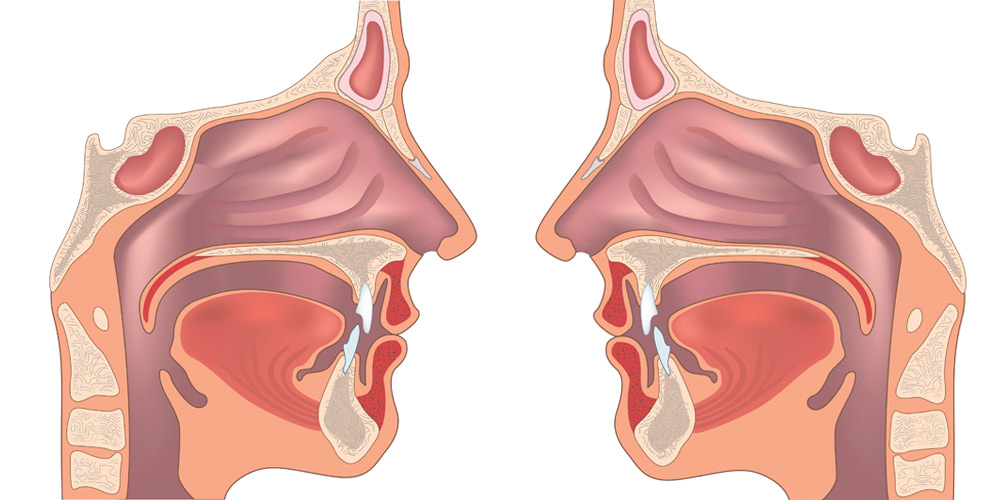 The tonsils and halitosis

Halitosis often originates in the tonsils. The tonsils have twisted tubular invaginations that reach from the surface to the interior of the parenchyma. Fragments of exfoliated epithelium, detritus of keratin and foreign bodies (such as food debris) can become lodged in the crevices of the parenchyma (commonly known as tonsillar crypts), forming tonsil stones (whitish foul-smelling chunks). Tonsil stones are a common cause of halitosis, and may form periodically or continuously. Although this is a practically asymptomatic condition, some patients often become aware of it when they see the chunks on their tongue. There can be cases in which tonsil stones do not form, but upon pressing the tonsils a strong and nasty odour is expelled, even in tonsils with a healthy appearance (with no signs of hyperaemia or hypertrophy).

The flora present in the tonsils, even those of patients without previous cases of tonsillitis, contains bacteria that are capable of producing foul-smelling odours. An epidemiological study showed that in 49 patients with chronic tonsil stones, those who had tonsil stones when the VSCs were measures scored 5 times higher than those without.

Other causes of halitosis

Other conditions and diseases of the upper respiratory tract that are associated with halitosis include the presence of foreign bodies, chronic atrophic rhinitis, nasopharyngeal or retropharyngeal abscesses and carcinomas of the larynx.

Causes of halitosis found in the lower respiratory tract, i.e. causes that first originate below the larynx, are less common. They include bronchitis, bronchiectasis, pneumonia, lung abscesses and carcinomas.